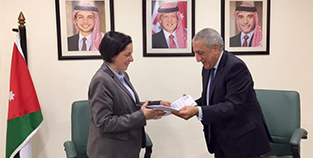 A Memorandum of Understanding and Cooperation was signed between The Royal Institute for Inter-Faith Studies (RIIFS) and The Federation of Muslim Associations of Brazil (FAMBRAS) during an official visit that Dr. Mohamed Hussein El Zoghbi, President of FAMBRAS made to Jordan.

FAMBRAS is a philanthropic organization which has solid partnerships with international Islamic entities that assist directly and indirectly FAMBRAS projects: scholarships for Hajj, printing of books distributed in Daawas and donation of food for the mosques Iftar, among others. It was also through these partnerships that, throughout its history, FAMBRAS has intermediated the construction of 37 mosques in Brazil.

RIIFS had participated in the fifth edition of the course on “Islamic World: Society, Culture and State” held at the Rio Branco Institute, Brasilia on 4-8 December 2017. The course was organized by the Brazilian Foreign Ministry to try to offer to decision and opinion makers in Brasilia an outlook of the Islamic World. The fifth edition was hosted by the Rio Branco Institute, the Brazilian diplomatic academy and the Parliament. The event was co-organized by the Federation of Islamic Associations in Brazil.