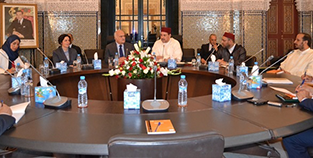 His Highness Prince El Hassan emphasized, in his speech after the signing of the partnership agreement between the two institutions, that the partnership and cooperation agreement with the Muhammadiyah Association of Scholars emerges within the framework of endeavors to advance the public interest of this nation, in order to disseminate an enlightened discourse that is fraught with a spirit of moderation.

His Highness called for the necessity of giving due care and attention to the coming generations, through reviving the concept of scientific diplomacy, and relying on societal energies; whilst emphasizing that we are on the steppingstone of a good and intensive partnership, where we aim to move from our current reality to a reality that is the product of our free will.

His Highness praised the moderate intellectual and academic endeavors of the Muhammadiyah Association of Scholars through its centers, publications, and academic journals, under the patronage of King Mohammad the Sixth, the monarch of the Kingdom of Morocco.

In his statement Dr. Ahmad Abbadi, Secretary General of the Muhammadiyah Association of Scholars, underscored that the latter is honored by the visit of His Highness to its headquarters, and is likewise honored, under the supervision of Prince El Hassan Bin Talal, to conclude a partnership and cooperation agreement with RIIFS.

Dr. Abbadi added that this Agreement places the two institutions on the stepping stone of a constructive and intensive partnership which enables accentuating the common values, in order to reach a new threshold of hope, through relying on a calm and constructive dialogue, that emanates from a profound recognition of the commonalities of the human race, and the integration that may be engendered by the wisdom spawned by the tribes and nations of the unique human species.

The partnership Agreement was attended by a number directors of the research centers and academic units affiliated to the Muhammadiyah Association of Scholars.