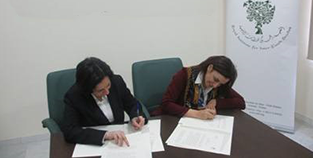 The Director of RIIFS, Dr. Majeda Omar, and the Director of Adyan institute in Lebanon, Dr. Naela Tabbara, signed a cooperation agreement between the two institutions in the academic, religious, cultural and civilizational fields.

The Agreement includes cooperation in the fields relating to dialogue, understanding between the adherents of religions and various cultures, religious pluralism, citizenship that incubates diversity, the entrenchment of common human and ethical values, and confronting extremism of all forms.

The Agreement also alludes to cooperation through contributing to developing critical thought, that is firmly rooted, and reinforcing participation in a manner instilling respect for religious diversity in the public arena, building the capacity of youth, educators, and social and religious leaderships to build peace and promote cultural and religious understanding domestically, regionally and globally, and cooperating on organizing symposia and academic conferences addressing themes of common interest, facilitating the exchange of experts, scholars and researchers, and cooperating on training and formulating programs, policies and research on topics of common interest.

It may be mentioned that Adyan institute is the academic section of Adyan Foundation, which is a non-profit independent Lebanese institution that seeks to entrench religious pluralism and enhance appreciation for it and also manage it at the social, political, educational and spiritual levels, and it also strives to promote citizenship and coexistence and developing peace, social cohesion and spiritual solidarity between individuals and groups through strengthening positive relations, objective knowledge and joint commitments.

The Royal Institute for Interfaith Studies was founded in Amman in 1994 under the chairmanship of HRH Prince El Hassan Bin Talal as a pioneering research center dealing with all topics related to interaction between religions, civilizations and cultures at a regional and global level. Actually, the activities of the Institute encompass themes related to religious and cultural diversity and pluralism in the Arab and Muslim worlds; the necessity of safeguarding and developing such diversity is an utmost priority for RIIFS.

Agreement between RIIFS and Adyan Institute
Scroll to top