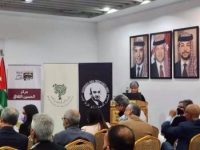 Posted in Programs By Posted on

Under the patronage of HRH Prince El Hassan bin Talal, The Royal Institute for Inter-Faith Studies (RIIFS) and The Arab Thought Forum (ATF) organized a roundtable entitled ‘The Path of Ideas’. The roundtable was held on 23 April 2017 in Amman, Jordan, with the participation of experts, academics and diplomats from different countries. During the event, the “Arab-Iberian-American Divan for Thought and Cultural Exchange” was launched. The Divan is a platform dedicated to promoting dialogue between the Arab and the Ibero-American world and enhancing collaboration at the academic, social and cultural level. This platform will facilitate exchange of ideas as well as promoting cultural and scientific exchange, to establish a human, cultural and religious dialogue between both worlds.

The Divan is inspired by past initiatives and ideas from the Arab culture in Baghdad and Cordoba, where cultural, intellectual production and innovation prospered due to contributions by Arab and non-Arab personalities, from different religions and ethnicities. Unity was achieved within the Arab culture based on diversity and pluralism with a common goal: the search for the truth of the human being.

The ‘Divan’ aspires to benefit from the experiences of other institutions that promote cultural and human dialogue as a unique tool to foster relations between people. An example of these institutions is the “Three Cultures Foundation of Seville”, and “the Academy of Latinity”, which were created with the aim of strengthening cooperation and solidarity between the Latin and Arab Worlds as well as enhancing cultural and scientific exchange between the different peoples.

This initiative aims at advocating a new world humanitarian order based on shared values and our belief that human capital is the most important capital. We should invest in our human capital and cooperate at promoting human and cultural dialogue between people to enhance cultural exchange that enriches diversity and facilitates a better understanding of how we perceive one another.

The Royal Institute for Inter-Faith Studies will publish the proceedings of the Roundtable in Arabic and Spanish; this will be the first of the “Divan” publications.

The following participated in the “Path of Ideas” Roundtable.

Thinkers, academics and researchers from Arab and Ibero-American countries will be invited to participate in future activities of the ‘Divan’.